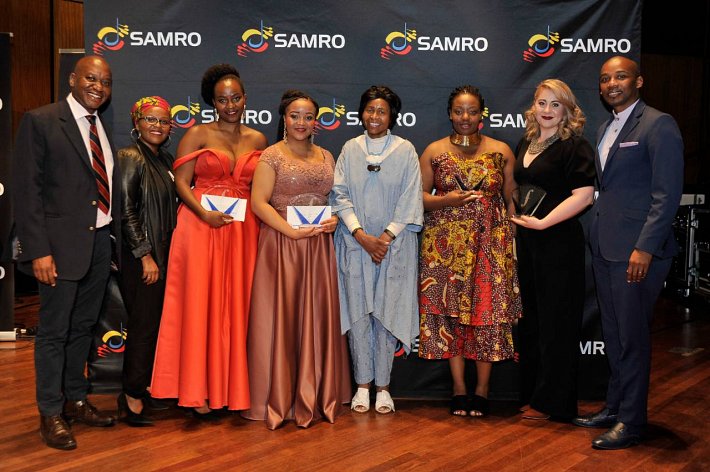 The Linder Auditorium bursted at its seams with music lovers who came to see who the winners of the SAMRO Overseas Scholarships Competition for Singers 2019 would be. Two finalists, Keorapetse Kolwane (Jazz) and Palesa Malieloa (Western Art Music) have each won a scholarship of R200 000 to further their music studies abroad and have their names added to the SAMRO Foundation’s roll of honour, joining fellow scholarships alumni from as far back as 1962.

Keorapetse, who completed a diploma at Tshwane University of Technology and graduated at the University of Kwa-Zulu Natal, is currently busy with her Honours degree at WITS. She will be able to use her scholarship of R200 000 to pursue a Masters in jazz performance either in New York or at the Norwegian Academy of Music in Oslo, Norway.

Palesa, a North West University graduate, will be able to use her prize money of R200 000 scholarship to complete her Master of Performance studies at the Hochschule für Musik und Tans Köln, under the tutelage of Professor Josef Protschka. She was also awarded the SAMRO/NOASA award of R20 000 – a bequest by the National Opera Association of South Africa.

The runners-up were Daniëlla Hart and Thembinkosi Magagula in the Jazz and Western Art Music categories, respectively, who will each receive R70 000. Daniëlla was also awarded the SAMRO/ De Waal award of R15 000, a bequest made by late songwriter Anton de Waal and Thembinkosi the SAMRO/NOASA award of R20 000 – a bequest by the National Opera Association of South Africa.

It was a dazzling evening of music, elevated by knockout vocal performances by the four finalists, all in their 20s and all brimming with youthful talent and promise. They pulled out all the vocal stops to impress the adjudicators as they performed their own choice of repertoire as well as the prescribed commissioned works. The commissioned works were How would you feel?, a Jazz work by Siya Makuzeni based on Miriam Makeba’s speech to the United Nations Assembly in 1963, and Neo Muyanga’s composition with lyrics from Gcina Mhlope’s poem Qinsani uThando.

In addition to the two overseas scholarships, a number of merit and subsidiary awards were handed out to outstanding finalists and semi-finalists. Liso Gcwabe and Goitsemang Lehobye won R45 000 each with the new SAMRO / Doreen Nteta Indigenous African Music Award for their interpretations of arrangements of indigenous work Wen’use Goli by Makuzeni and Muyanga in the semi-finals of the competition. About Doreen Nteta, her daughter Mokgadi said, ‘I consider this to be a great tribute to my mother, and as a five year memorial and testament to her.’

A plethora of other awards were offered to the semi-finalists including two SAMRO / NOASA awards of R20 000 each, two SAMRO / De Waal Study Awards of R15 000, two won merit awards, and two SAMRO / OPSA awards.

The evening sparkled with inspiration as speakers made striking points about the Scholarships and the music industry at large. After a whimsical introduction by SAMRO Foundation Managing Director, Andre le Roux, SAMRO Chairman Nicholas Maweni gave a heartfelt opening address. In his speech Maweni acknowledged the value of the competition as ‘a good example of how the SAMRO Foundation has boosted the careers of many performers’. Moving then to the core of SAMRO’s mission, Maweni appealed to President Cyril Ramaphosa not to sign the Copyright amendment bill in its present form as it would have a broad and negative impact on the creative industries.

After complementing the young virtuosos Minister of Higher Education and Training, Buti Manamela, recognized the cultural and creative industries as a ‘catalyst for economic growth in South Africa’ and highlighted the value of international cultural exchange.

Lastly, singer and academic Nomfundo Xaluva, in her role as deputy chairperson of the SAMRO Foundation, highlighted the many great musicians who had been part of the SAMRO competition. She herself had competed as a finalist in the competition, and while she did not win the first prize, the competition made a strong impression on her. In the spirit of Womens’ month, she appealed for women to work together, saying ‘your win is my win’, and encouraged all to share in each other’s successes.

A highlight of the evening were the special performances of Mpho Molikeng and Prince Bulo. Mpho Molikeng is a curator, composer, performer, and most importantly a leading specialist in Indigenous African Music. He delighted the audiences with his performances in tribute to the SAMRO Foundation and US Embassy’s Indigenous African Music transcription project.

After a vibrant performance of his original compositions, the rising Gqom and Amapiano star, Prince Bulo, announced that he wanted to join the supporters of the SAMRO Overseas Scholarships Awards by offering R15 000 every fourth year for composers to have the opportunity to make their mark in the music scene. (Prince won the SAMRO Overseas Scholarships for Jazz composition in 2014).

The audience expressed their delight at the slick event, and many stayed after to listen to DJs from SAMRO’s talented staff, and only leaving at midnight. From their responses , the annual SAMRO competition finals has, without a doubt, become one of the highlights of the music year in South Africa and an event not to be missed.